Gateway In the News... 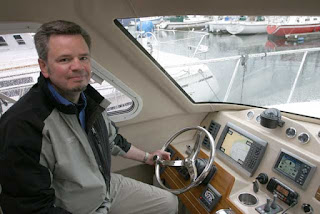 Dreaming of yacht ownership, but losing sleep at a quarter-million-dollar price tag?

For $34,900, potential pleasure cruisers can own one-eighth of a fully loaded, fuel efficient luxury boat.

The share includes five weeks of scheduled time on the boat every year, plus open time when no other owners are scheduled.

“That’s a big benefit for local owners,” Martin said. “If there’s a nice day in December, they can call me up and I’ll get the boat ready.”

A monthly management fee of $290 pays for moorage, insurance, maintenance and cleaning. Martin said he even handles concierge service, stocking the yacht with food and beverages, kayaks and other things owners might request.

Martin said his business is just another way that the pleasure boating industry is adapting to a tough economy.

Three years ago, looking to streamline the build process, Aspen contracted with Nordic Tugs in Burlington to build hulls for their yachts. Martin said his own partnership with Aspen didn’t just lower prices, but it made yacht ownership more practical to a marginal market.

“There’s two types of people who will be most interested,” he said. “It’s a low-risk, low-cost way for people new to boating to get into it.”

He said the other target group is experienced boaters who are tired of maintaining an expensive boat that they rarely use.

If one-eighth isn’t enough boat, Martin also sells larger shares (one-fourth and one-half), depending on how much boating his customers want each year.

Martin negotiates the schedule between the owners. If anyone doesn’t use their time, he tries to schedule a charter and pass the earnings on to the owner.

“And after seven years, the boat is sold and the money is divided back to the owners,” he said. “That way we keep the program young and fresh.”

According to a press release last week, Aspen plans to place four more yachts into Gateway’s fractional ownership program. It’s a $1.3 million retail deal for a new Aspen C90, which Martin said is coming this summer, and options for two more 28-foot Aspen C90s and a 36-foot C110.

At Trawler Fest next week at Cap Sante Boat Haven, Martin is teaming up with Aspen founder Larry Graf to market both outright and fractional ownership.

Martin said his boat, and an identical one from Aspen, will be docked stern-to-stern, and potential owners can explore both options.
Martin’s idea for fractional yacht ownership came from his days as a corporate pilot. He flew several jets for different corporations but rarely had a scheduling conflict. So he wondered why corporations didn’t share their aircraft.

Now fractional aircraft ownership companies such as NetJets make up more than half of corporate jet sales, Martin said.

Most of his potential customers have the money to buy a yacht fraction outright, but Martin said he founded his own financing business to bring ownership within even closer reach.

Buyers can put 30 percent down — as little as $10,500 — on their share of a yacht. Martin said traditional financing through a bank can be hard to obtain for fractional ownership.

Next week’s Trawler Fest is a celebration of the pleasure cruising lifestyle that begins Tuesday with Trawler Fest University at the Northwest Educational Service District 189 building, 1601 R Ave. Boats start arriving on Wednesday, and show hours are 10 a.m. to 5 p.m. Thursday through Saturday.

Seminars will cover topics from purchasing a trawler and refitting an older boat to anchoring tips and the latest navigational resources and technology.

General admission is $15 per day. Evening programs are extra and include cocktails and hors d’oeuvres, along with parties and shows begin at 5:30 p.m. Thursday and Friday at the Seafarers’ Memorial Park Building. The award ceremony Saturday evening is at the Cap Sante Boat Haven hospitality tent.

Trawler Fest is produced by PassageMaker Magazine, a division of Dominion Enterprises.

This four boat deal provides for the immediate purchase of a new Aspen C90 along with options for two more Aspen C90’s (28’) and one Aspen C110 (36’). Total retail value of the deal exceeds $1.3 million at current list prices.

Gateway’s innovative fractional ownership program dramatically lowers the cost of yachting, opening up the market to a much larger demographic. Gateway manages all aspects of yacht ownership providing top-quality all-inclusive service right down to the clean and shine. This successful approach is developing fierce customer loyalty and strong demand for their Fractional Ownership and Charter services.

Combining that innovative service with Aspen’s innovative yachts is the perfect match. Aspen Power Catamarans holds an international patent on their fuel efficient design that is an Innovative Award Winner. Aspens are ultra stable boats incorporating state-of-the-art electronics and other design innovations that make them the perfect year round cruiser for Puget Sound to Southeast Alaska waters.

As a part of their purchase agreement, Gateway and Aspen will be jointly marketing their innovative products in a very innovative way. Beginning at the Anacortes Trawler Fest (May 17th to May 19th), look for two identical boats stern-to-stern… if you are interested in buying a whole boat, you talk to the fine folks at Aspen, or if you prefer a professionally managed fraction then you talk to Gateway.

The Gateway Program is similar to Berkshire’s Netjets corporate jet fractional ownership program, with 1/8 fractions of Aspen and Nordic yachts bringing 5 weeks of advance scheduled use per year plus unlimited open time availability. This ground-breaking program produces the lowest cost method of ownership there is, less expensive by far than sole ownership, an equivalent amount of charter, or even most fly-to-destination vacations.

These yachts are the most fuel efficient in the industry; fractional ownership is inherently green; and that makes this program the most environmentally friendly power yachting experience possible.

Program details can be found at www.GatewayYachts.com.